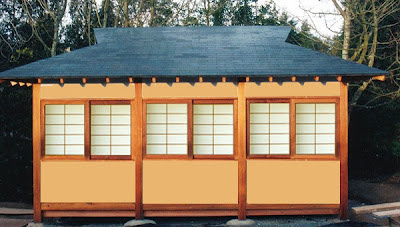 As the planning and work for the dedication of our Island Retreat Center proceeds, we have been making adjustments to the design to accommodate both the purpose and portability of the Zendo building. The roof design has undergone several modifications to allow for the structure to be built at Open Gate and be transported by flat bed trailer to the island.  The original farm house thatched roof design has proven to be too costly and complicated, requiring that the artificial thatch be shipped from Florida (from China) and installed over an existing weatherproof roofing material.

We have opted instead for a modified hip roof design that will allow us to use metal roofing for the purpose of collecting rain water. Since there is no water supply to our property, all water has to be carried in. A metal roof built for the purpose of collecting water will allow us to gather rain water for uses other than drinking and food preparation.

The rendering above is a composite created in Photoshop from three photographs of buildings that are similar to our proposed Zendo.  The finished building will look like the composite photograph above with metal roofing in lieu of the shingles shown. The ends of the building will have doors and/or a bay window similar to those at the meditation hall Open Gate.

Construction is well underway with the first hut nearly complete and the walls of the Zendo going up within the week. The final roof assembly will wait until the building is on site to allow for freeway transport of the structure. The roof adds another three feet to the height and an additional six feet to the width which would not be transportable by truck of ferry.

Work party weekends will soon be identified and announced for those who might be interested in volunteering time in either during construction or grounds preparation on the island.
Anyone interested in contributing to the construction fund can contact Miles at opengatezendo@msn.com or send donations by check payable to Open Gate Zendo: 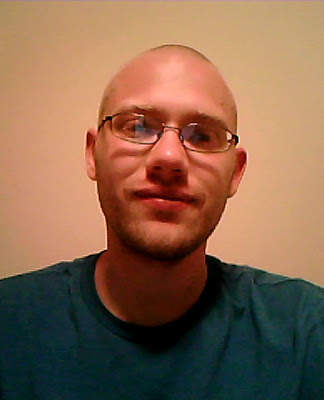 
My name is Marc Paine. I am 34 years old, married with two young daughters. Beginning in 1993, I started receiving instruction in Taoist qiqong, philosophy and meditation. I practiced regularly throughout college where I also began classes in Isshinryu Karate and Aikido and was introduced to meditation in the Japanese and martial art culture and context. After college I started an intense practice of Tomiki-ryu Aikido and taught Chinese martial arts and Taoist meditation. In 2000 I spent a week in a Benedictine monastery and in 2001 I spent the summer at the same monastery. I met my wife late in 2001 and began attending Lutheran seminary in 2002. During this time, my meditation practice (Taoist/Zen) became both more sporadic and more influenced by Ueshiba and those Japanese Zen teachers commonly associated with the martial arts (Takuan Soho, etc.) and Soto Zen while continuing my Aikido practice.

After graduating in 2006, I was ordained a Lutheran priest and worked for three years as a parish pastor and university chaplain (commonly known as "town and gown" ministry). My Taoist/Zen meditation all but ceased at this time. However, in 2007 I took up long distance bicycling and began to practice seated meditation influenced heavily by Soto Zen teaching. I began to bicycle out into the countryside and find a nice spot in the shade to sit in meditation.

My disillusionment with work in the church grew at the same time I finally began to directly apprehend elements of the Dharma. I remember sitting in half-lotus under the university's bell-tower when I, following the discipline of "following the thought," saw clearly that one is not one's thoughts. From that time, my seated meditation became more and more frequent, my reliance on Zen and Stoic teaching more pronounced. I resigned my position in 2009 and moved to Joplin, MO. My wife, a nurse, went back to work and I began to stay home with our children. We joined an Eastern Orthodox parish in 2010. My meditation continued to become more consistent.

On May 22, 2011, a tornado destroyed our home. I sheltered my two daughters in the bathtub and climbed out of the wreckage to find devastation as far as I could see. My wife was at work at the time in the hospital in Joplin that was not destroyed. I later described the experience of being inside the tornado as "much like zazen," and was very grateful for my practice. By midnight, my family was reunited, alive and well and homeless. We relocated to Rogers, AR, where we still live now. For a month or so following the tornado, I felt something like a block to solitary sitting, so I contacted a nearby Soto group with which I had sat in the past and began to sit with them. This "jump-started" my solitary sitting again and emphasized for me the need and benefit in complementing solitary meditation with group meditation.

I have continued my practice and with this newfound appreciation for group sitting, started the only sitting group in Rogers in a yoga studio. Seeking oversight and accountability for the group, I remembered having run across the Zen Buddhist Order of Hsu Yun (with its beginnings in Honolulu, HI where my family used to live). I contacted Koro Kaisan Miles to inquire about oversight and was pleasantly greeted with someone whose journey from Chinese Taoism to Japanese Soto Zen back (somewhat) to Chinese Zen was so similar to my own. I continue my practice, sitting group, and have enjoyed correspondence with Koro Kaisan, in whom I feel I have found very much a kindred spirit. I hope to visit Open Gate for the Summer Sesshin, and I am confident that in this Sangha I will find many more such kindred spirits. I'm interested in becoming a member of the Order for many reasons, including the possibility of becoming an institutional and/or hospice chaplain. When I'm not walking around going nowhere in particular or sitting facing a blank wall, I am practicing martial arts, knitting and crocheting, yo-yo-ing, doing hospice volunteer work, and writing.