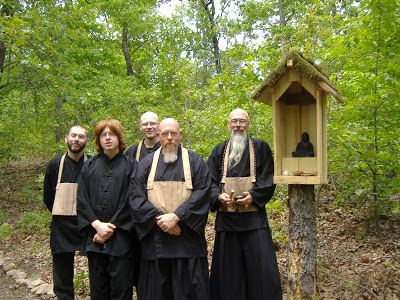 On May 18th, members of the Order gathered a few country miles outside of Edgar Springs, Missouri for the official dedication of Mushin Zendo / Dragonfly Hermitage. Dragonfly Hermitage is the mountain home of Boundless Way member Jizo Hodo Steve Thompson. After several failed attempts at procuring a home for his hermitage and future zendo, Hodo san was finally able to secure a lovely piece of the Ozark foothills.  A forested, granite strewn hillside and gentle stream bed will one day be transformed into a residential practice center complete with meditation hall, community kitchen and multiple residential huts overlooking the wooded valley. 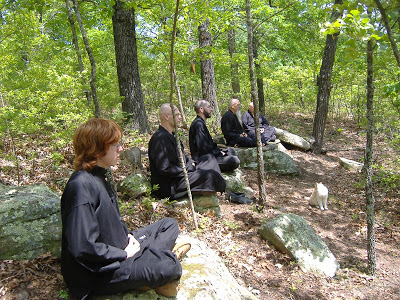 Sitting in the No-Zendo of Mushin Zendo,
Natural granite zabutons overlooking the wooded valley behind the hermitage.

Currently, Hodo san conducts his practice out in the open and invites all who wish to commune with nature to join him on his naturally arranged granite zabutons. Only in the snows of this last winter did Hodo and his small sangha move into the shelter of the one-room hermitage for zazen, otherwise it was coats and warm blankets followed by hot tea and good company. Hodo intends to keep this practice center off the grid and as independent as possible. He has already stripped the existing electrical wiring out of the cabin and he intends that all light at Dragonfly Hermitage will be by candle and lantern.

Hodo says he is in no hurry and that the construction of Mushin Zendo will be done step by step as time and materials become available. He does not intend to go into debt in order to live “off the grid” and outside “The Matrix.” He intends that the meditation hall, huts and related facilities will be manifested through dedication and volunteer efforts, but this will be a gentle journey taken with mindfulness, one day at a time. 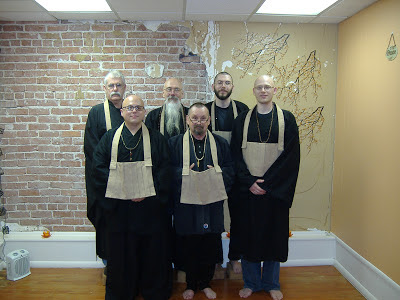 In fewer than ten years the Order of the Boundless Way has grown from a small local sangha in Olympia, Washington, to a global organization with members in ten states and seven countries.  Dedicated to the transmission of the Dharma through original Buddhist teachings and authentic Zen practices, the Order has built its worldwide membership from individuals who are committed to cutting through delusion and helping others realize their true nature.


Most recently (May 16th), an OBW dedication and ordination ceremony was held in Rogers, Arkansas, the home of Blue Lotus Zen Community.  Blue Lotus is a small local group of dedicated practitioners led by Marc Paine (Monju Tengaku), a former Lutheran Priest and long time Zen practitioner.  Marc became a student of Boundless Mind Zen in 2011 and was among the celebrants attending the dedication of Clouds and Water Hermitage last summer.  The Blue Lotus Zen community meets two to three times weekly at Southwind Yoga Studio and is open to anyone wishing to learn and practice the Dharma way.


The name Blue Lotus is a reference to the Sword of Manjusri, the Bodhisattva of Great Wisdom, which is termed the Blue Lotus Sword which has the power to cut through every delusion.  As a survivor of the devastating Joplin, Missouri tornado, Marc’s path has brought him through life-altering tragedy to Manjusri Bodhisattva’s way and Boundless Mind Zen.

Marc can be contacted through the Blue Lotus website at: http://www.bluezen.org
Posted by Koro Kaisan at 11:18 AM 1 comments


On Monday, April 22nd, Chris Wiedamann joined the ranks of the Order of the Boundless Way in an Earth Day ordination ceremony held under a giant spruce tree at Lake Sylvia State Park.  Six people set out with Chris along the park trail in Montesano, Washington, including his friend and co-worker, Cindy Burton.  Also in attendance were ordaining teacher Hadashi Jeff Miles, Gansho Lenny Reed, and Joe Gledhill, all of Mountain Way Zendo, and Trey Grubbs and Koro Kaisan Miles of Open Gate Zendo. After a quiet processional walk through the woods, the party fanned out under the giant old tree for a brief liturgy.  Hadashi then spoke of Chris and what it meant to have him ordain, handing him the robe, bowl and staff in the process.  Afterward, each of the attendees said a few words about Chris and congratulated him on his ordination.

Chris originally took refuge vows with the Lexington Shambhala Center in Lexington, Kentucky in May of 2009, and was given the name ‘Fearless Dharma Tree’ (Jigme Chöshing in Tibetan).  This was incorporated as the first part of his new dharma name, with the second part being ‘Kimchi Cloud’. As he has an affinity for Korean culture and Zen practices, Chris uses the Korean translation of his name, which is Muoepeopsu Jeoun.  While in Kentucky, Chris also practiced with several other groups in the area, including a student group at the University of Kentucky, and the Cincinnati Dharma Center.

A practicing service forester and self-described ‘anarchical Buddhist’, Chris moved to Washington to work for a local conservation district for a year. While there, he practiced with Open Gate Zendo in Olympia, Blue Heron Zen Community at Seu Mi Sah Korean temple in Tacoma, and most recently, with the small sangha at Mountain Way Zendo in Grays Harbor, where he trained for his ordination.  He has recently relocated to western Virginia to be closer to home, and while he is now one of many far-flung Dojin of the Order, he will be sorely missed by his adoptive family out west.