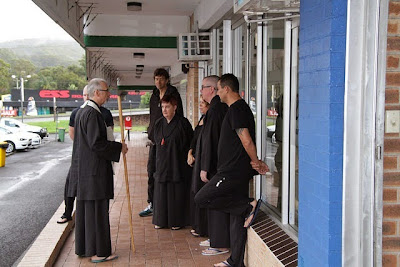 In the still of the morning and to the sound of the beating drum …….the silence was broken. The call of compassion alerted two Aspirants:  Merelyn Tripolone and Patrick Hughes to formally walk to their ordination.  Preliminary drums and Buddhist medicine chanting, celebrated this special event until the steps toward ordination had begun.

The Aspirants were poised to walk. The Dojin slapped the staff to the earth, to instill silence and began the call of compassion.
Namu Butsu
Yo Butsu u in
Yo Butsu u en
Bup po so in
Jo raku ga jo
Cho nen kanzeon
Bo nen kanzeon
Nen nen ju shin ki
Nen nen fu ri shin
Then silence……..


A clap of sticks produced the first steps.
The steps they took passed numerous shop fronts and stairwells to the entrance that leads up to Silky Oak Zendo. 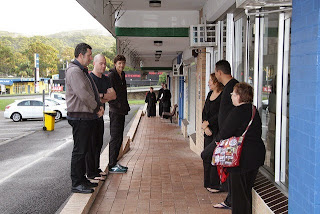 In procession style, our Sangha stood either side of the path to chant the universal “Om Nam” as a sign of recognition and support.


Our procession then ascended the stairs into the prepared Zendo, where we  all sat for one period of Zazen. 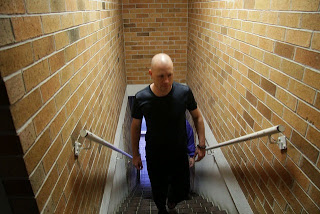 What followed was a chanting of the “Heart Sutra” and the reciting of “Hakuin’s Song of Zazen”, ending in silence.
The ordination table was then placed in position and the ordination items for each Aspirant were retrieved.
An opening address by the Dojin was followed by a description of each Aspirants journey.
Both willing and compassionate Aspirants were then formally ordained into The “Order of The Boundless Way” – “Mugendo Zen Kai”
They were given their Dharma names and ordination items: The Ordination Certificate, The Rakusu, The Staff and The Orioki Set. 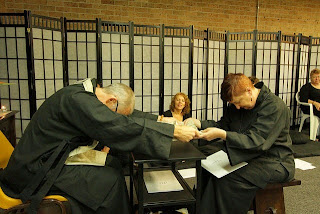 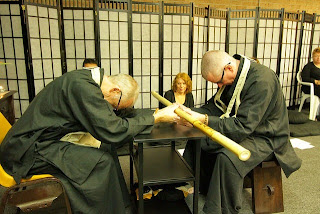 To close the ceremony, the Sangha performed a “Mantra to Music” as a gift to the newly ordained.
Gate Gate Paragate Parasum Gate Bodhisvaha 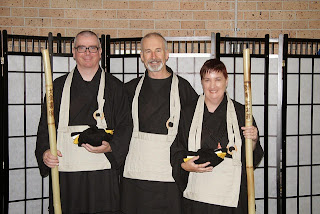 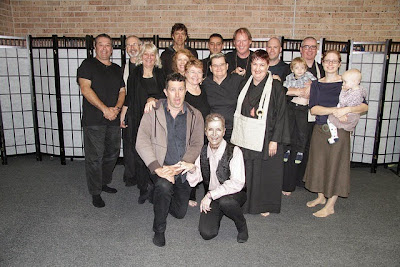