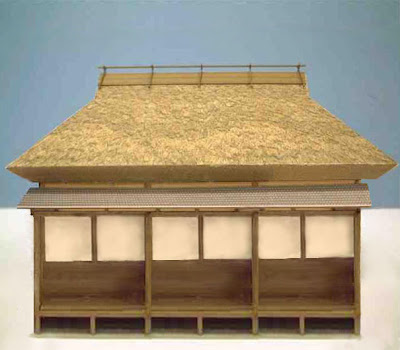 Tenth Anniversary Celebration (Part One)
This summer marks the tenth anniversary of the Order of the Boundless Way, which was founded on June 29th, 2002.  From modest beginnings in a converted garage Zen Dojo in Olympia, Washington, the Order has grown to include students, members, and sanghas on five continents. Through the years we have had numerous blessings, including the good fortune to associate with many wonderful kindred spirits who fully understand and live by the principles of original Zen.
Among the other gifts that we have received has been some waterfront island property less than an hour away from Open Gate Zendo in Olympia. As part of our tenth anniversary activities, we plan to establish a presence on the island in the form of a small zendo.   This will be the first building of a retreat center that will be made available to members of the sangha for solitary retreats, sesshins, and special gatherings of the sangha.
Ultimately, the completed retreat center will consist of two main buildings: a zendo fashioned in the style of a traditional thatch-roofed Japanese farmhouse (rendering pictured above) and a main entrance hall that will be more like a traditional Zen temple building.   Both buildings will be on the same scale as their respective counterparts at Open Gate Zendo but will have their own unique styling.  Additionally, there will be three to five smaller outbuildings that will serve as private retreat huts and service buildings for the compound.
Unlike individual properties owned and/or leased by the individual sanghas, this island retreat property belongs to the Order overall and therefore will be funded by the membership and others interested in supporting our organization.  It is estimated that the entire compound will cost fewer than thirty thousand dollars, with each of the larger buildings costing just under ten thousand dollars each.  The goal for this summer is to have one hut and the zendo building built for our celebration and dedication. We have already had a few generous donations given to help move us forward with the initial construction, and currently have three thousand dollars to go towards the construction of the Zendo. The first hut is already under construction and has been funded separately; it will be moved out to the island this spring and act as our initial base of operations.
This announcement is intended to be both a proclamation of intent and an appeal for contributions. Local sangha members and friends have agreed to volunteer all of the labor, so all we need is the money for materials and related building expenses. The goal of this initial appeal is to get the seven thousand dollars needed to complete the zendo building and get it ready for this summer’s celebration. Anyone interested in contributing to this effort can contact Miles at opengatezendo@msn.com or submit donations by check (payable to Open Gate Zendo) to:
Open Gate Zendo
4123 Biscay Street NW
Olympia, WA 98502
Posted by Koro Kaisan at 11:11 PM