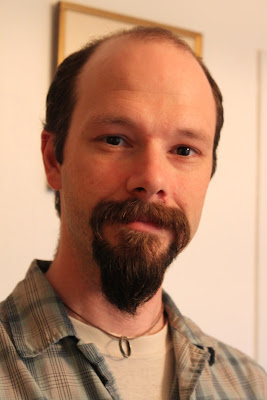 My name is Sean Harrington. I am 35, a Husband, a Father, a Public Servant, and dojin. I work in the State Affordable Housing and Homelessness Prevention programs. I have been practicing with the Open Gate Sangha of the Order of the Boundless Way for over two years now, and have been a formal Student since February of this year, although until now I have not been formally introduced to the membership of the Order. With ordination impending, this would appear to be the opportune moment.

I come from a family that was never very religious (I can’t remember ever attending church with my parents), but who were not avowed atheists – my parents each seemed to believe in god after a fashion. For my part, I was drawn to the biological sciences and didn’t really even consider spirituality. I first encountered Zen through reading Jack Kerouac's The Dharma Bums in high school. Something struck me as right about Zen, and I subsequently kept it “in my back pocket” while I went off to University.

I started to become affected by the “comings and goings” of life in my early twenties. I lost a parent (albeit after an extended illness), graduated from University, met my and married my wife, graduated again, lost the other parent, and became a father for the first time - all in less than ten years. Amid a swell of Great Doubt, my view of everything – life, meaning, acceptance - started to coalesce, and I returned to Zen.

I embarked on a period of study in which I read extensively of translations of major sutras and of Zen (Ch’an/Son/Thien) and Taoist literature, classical and modern. Eventually I came to the in hindsight flabbergastingly obvious realization that it was insufficient to treat this as an intellectual or philosophical exercise – actual practice was needed. After a false start or two, and during a period of spotty solo practice, I was introduced to the Order of the Boundless Way. This immediately struck me as right, and so here I am.

I have greatly enjoyed the support, camaraderie, and wisdom of the Order. Though I will be even more elusive than usual in the next few months (kid #3 is on the way!), I look forward to our future together as travelers on this Path. May all beings benefit from it.